Posted by Vlad de Draculesti at 2:02 PM No comments:

Vladimation | Spectatorial Gaming: The Last of Us - Ep 1

We're back!  Check out our new series, 'Vladimation | Spectatorial Gaming', where you can enjoy immersive gameplay without having to play the game. Edited for smooth continuity, and a pleasurable experience. I hope you enjoy it!

PS Sorry it took so long to upload a new video! Settling into the new city and the new studio very well now. Ran into a few potholes, but it's all smoothed over now!
Thanks for your patience!
--Vlad

Posted by Vlad de Draculesti at 11:09 AM No comments:

New Location, Settling in, Next Phase

Hopefully everyone had a happy and safe Christmas.  Vlad took a little time off to load up and move to his new city, where he currently resides.  While settling in, he's managed to celebrate the holidays with friends and family.

As always, he never rests for long, and is actively working to push the next phase of his plans ahead.

Here's a candid picture of Vlad from just days ago: 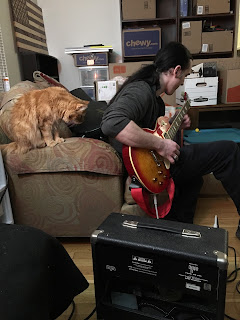 Vlad has taken a hiatus from Facebook, and has focused his energy establishing himself on other platforms, making friends he wouldn't otherwise without such a move.  Behind the scenes, he's been making a few tweaks to his studio for ease and fluidity of production.

With a plate full of responsibilities, he will be working on the next YouTube Video in the coming weeks where he will personally explain some of the changes, intentions, as well as show the new studio.

The training of new band mates has commenced, which will enable Vlad to book shows at local venues; eventually branching out to regional locations.  Each show date will be posted on this website in advance to give everyone a chance to stop by and enjoy the show.  There, you will be able to personally meet Vlad and show support by purchasing some Merch!

He looks forward to meeting as many fans and fellow musicians as possible!


Posted by Vlad de Draculesti at 11:15 PM No comments:

Despite how it looks, it fits perfectly on Twitter.
Posted by Vlad de Draculesti at 8:49 PM No comments:

This graphic is just one of many in our arsenal, but currently inspired by the need to adapt to Instagram.  Each platform has its nuances, etiquette, and idiosyncrasies that culminate a working marketing strategy. What works on one platform may not necessarily work on another; staying true to this ideology, we continuously find renewed inspiration with each new website we place ourselves on. 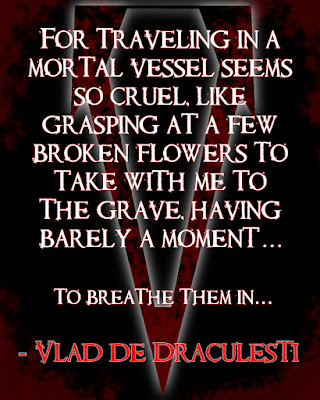 It's both exciting and refreshing!  The challenges associated with adapting to the parameters of each site keep us in a state of constant evolution, while conforming to the requirements of the sites and continuously expanding our reach.

Eventually, we would like to bring back the store, as the entire operation is funded strictly out-of-pocket.  Once we've sufficiently established Vlad on each of the latest platforms he's joined, we will begin building and marketing his online store, for, and to, each site with paid ad campaigns.  From there, you will be able to purchase Vlad's music and Merch.  Please bear with us.

Side Note: We had a store, until Wix no longer supported free commercial accounts, rendering the Paypal linkup useless.   A simple third-party shopping cart will be the next eCommerce solution.

The website you're reading this from is our new website, and will provide links to the new store once created.
(We redundantly linked it, as to dispel any confusion.)
We'll keep you updated.

We realize that not all Instagram users use Facebook, vice versa, and so forth; which is why Vlad is on no less than 17 websites.  Keeping up with so many is a full-time job in and of itself, especially with the aforementioned nuances of each.  That said, Vlad will be depending on Fan Support to keep the operation rolling.  He has a Patreon page, but won't peddle it around much until the brand is most solidified across his entire network--and until he begins booking shows(in the new city).

He doesn't expect to grow(push) his brand unless it meets the strict satisfaction of his standards, refusing to release inferior products, branding, and content; which is why, for the most part, Vlad seems rather quiet on Social Media across the board. For now, he's offering help to other artists where there is a need, while building himself, and his network.

In dealings such as these, it's nearly useless to pin down an anticipatory timeline when all will ultimately unfold.  However, it's safe to say 'soon' is a genuine possibility; in this case, 3 to 6 months, an expectation both hopeful and realistic.

Vlad is most desirous of touring regionally in 2020, therefore, many of his efforts will be made with that goal in mind.
Posted by Vlad de Draculesti at 1:13 PM No comments:

Vlad de Draculesti, who hails from New York, is an amalgam of darker styles, ranging from Hard Rock, Darkwave, Alternative, and Gothic Metal. His music is a gateway that bridges the Gothic underground with the nuances of modern Rock, so seamlessly, that many have difficulty categorizing it. His songs ‘When Stories End’ and ‘Ascetic Exorcism’ blend industrial beats and acoustic drums, as the vocalization of chanting groans and low-pitched tones embody both musical worlds. Most notably his multi-layered guitar work— a technique also complimented within his vocal tracks— reflects strongly in ‘The Powers That Be’ and ‘Most of the Time’; further lending credence to his bridge-over-boundaries sound. Although ‘The Powers That Be’ is a lengthy seven and a half minute song, it is both progressive and well paced; being the most musically complex in composition, instrumental layering, and harmonization. Additionally, it is one of the few songs with a guitar solo, which opens up with a stream of lightning-fast arpeggios.

Vlad established himself on multiple social media platforms, including Facebook, Twitter, YouTube, Reverb Nation, SoundCloud, Tumblr, Patreon, and Spotify; where his self-produced promotional graphics and music can be found. Further, among his platform reach are Speaker, Stitcher, and iTunes; where his Podcast ‘Vlad The Rock Star Radio Show’ can be heard. While recording his debut YouTube video, he self-produced the music video for his latest song ‘The Vault’.

In his early years as a musician, he drifted from band to band, until he made the cut as lead guitarist in a band that would eventually go on to actively perform for an entire year. He performed in bars and at parties across Long Island before ever turning 18. It wasn’t until nearly a decade later that he began recording independently, teaching himself everything he needed to know; whether it was learning Artists and Repertoire Standards, mixing and mastering a song, or graphic design to promote his music. He credits the tutorial community on YouTube in his first YouTube video for expanding his knowledge.

He is currently working on producing a live show for the local circuit, which he will eventually broaden regionally. During which time, he will be engaged in major record label pursuits.